Tech Trends That Will Change Our World In The Near Future

We got closer to a world where machines rely entirely on them every day. People are becoming more intelligent, but… 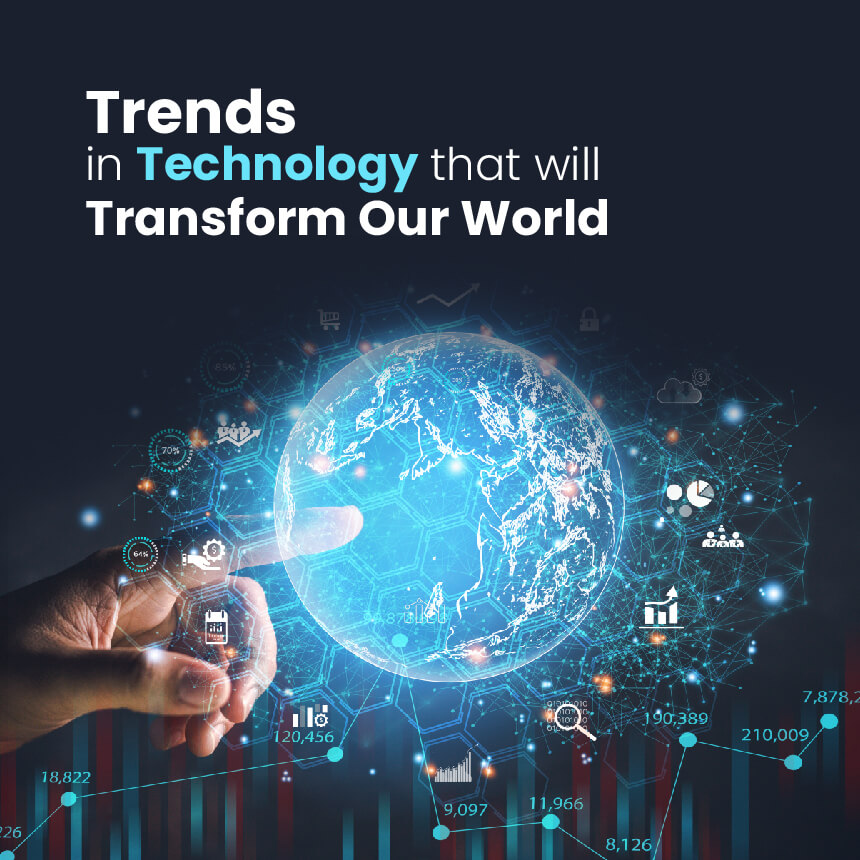 We got closer to a world where machines rely entirely on them every day. People are becoming more intelligent, but devices are becoming more intelligent. Technology is considered to evolve exponentially, as evidenced by the fact that it can bring anything to life, from an electronic toothbrush to a fully automated four-wheeler. Currently, all industries (directly or indirectly) rely on technology to run their businesses.

To analyze the impact of this advancement, the following are the top listed technology trends that will change the world in the coming years.

The Internet of Things (IoT) is now booming and has become a popular topic of conversation worldwide. It can connect any device to the internet and then analyze and transfer data so that the machine learns about the user’s wants on its own.

The possibilities for IoT are seemingly endless. Increased network agility, integrated artificial intelligence, and the ability to deploy, automate, coordinate, and secure various use cases at a hyper-scale will drive advancements in the industrial internet.

The utilization of information in text, graphics, music, and other virtual upgrades merged with real-world items is known as augmented reality (AR). AR is distinguished from virtual reality by this “real world” component. In contrast to a simulation, AR integrates and adds value to the user’s engagement with the natural environment.

It is one of the most popular technology fads right now, and it’ll only become more popular as AR-capable smartphones and other devices become more widely available.

By merging mechanical and electrical components, this technology creates very compact or integrated devices. These devices can be as little as a micron or as large as a few millimeters.

In the future, the volume of MEMs will be driven by the growth of the IoT industry, the increased production of wearable devices, and the growing need for integrated appliances. This technology could be used in the form of tiny micro rockets in space shuttles at some point in the future.

Creating a three-dimensional item layer by layer from a digital file is known as 3D printing. It began with printing plastic, progressed to printing metals, and is now capable of printing human cells. It’s used in various industries, including fashion, healthcare, and vehicles.

Food and body parts, including internal organs, autos, and even homes, are being tested in the 3D printing industry’s rapid expansion. This trend is projected to substantially impact the manufacturing and design industries in the near future. Nobody would buy anything if everyone could print everything, which is terrible.

Artificial intelligence refers to machines’ ability to think and act similarly to humans. Machines may now adapt to their surroundings and carry out various tasks without being told what to do. Robots that can understand human emotions and operate in factories like humans are being created. They can also be employed as chatbots to assist online customers, advise medical diagnoses, and act as virtual assistants on smartphones.

According to reports, it is growing at such a rapid rate that it may soon be able to replace people, resulting in mass unemployment. This trend will make decision-making easier and save a lot of time and money, but most tech pundits believe that if the proper boundary is not established, it will be a significant setback for humans.

It’s a method of teleporting quantum information, such as the actual state of an atom or photon, from one location to another via quantum entanglement between the two.

Since the 1990s, there has reportedly been a slew of quantum teleportation experiments, which have proven to be complicated. Even though it cannot be used on humans, a recent investigation took the trend closer to real-world applications. It essentially provides a mechanism to send encrypted messages over the internet, and the difficulty today is to make it widely available.

Blockchain is a technology that acts as a record of all transactions made over the internet. It is a digital ledger that can help reduce cybercrime. The blockchain comprises many interconnected blocks, each containing batches of legitimate commerce.

Businesses can utilize it to create reliable trading platforms. However, this would save a lot of time and effort.

Big Data has traditionally been characterized as too large a dataset for typical databases to manage. However, the term’s meaning has shifted to technologies that can handle large amounts of data in recent years. This number is expected to grow much more in the coming years because of the growing popularity of IoT and wearable devices.

Cloud computing stores data and applications over the internet rather than on a computer’s hard disc. The most well-known example of a cloud service is Google Drive. Other (authorized) users can examine data shared over the cloud from any location.

In various ways, the cloud computing service will benefit all industries. Lower operating expenses, better security, unequaled flexibility, and real-time system updates are just a few advantages. People will be able to maintain their fitness, businesses will develop globally, online buyers will be able to shop more conveniently, and language barriers will be removed.

After considering the developing top technology trends that will shape the future, it is clear that the end will be filled with many changes. Visit ONPASSIVE to know more.

Post Views: 178
Next Top Event Technology Trends Of 2022
Previous How Is Technology Changing The Business?